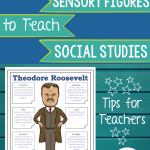 Some of my favorite social studies lessons of all time involve the use of sensory figures! What the heck are sensory figures? Also known as a body biography, a sensory figure is a drawing of a historical, living, or fictional figure with first-person descriptions of what they might have thought, seen, heard, touched, said, felt, or otherwise experienced during their lifetime. Oooh, that’s a lot. I think I’ll just show you an example to help explain it.

As you can see from this Teddy Roosevelt example, sensory figures allow students to take on the perspective of someone else. There are a ton of ways to use them, but the basic idea is that they allow students to show what they know about the figure(s) they’re studying by writing 1-2 sentences describing the figure’s thoughts, feelings, and actions. Each description is usually linked to the part of the body to which it’s most closely related. For example, students might draw lines connecting something their figure learned to their head, something they felt to their gut, something they saw or envisioned to their eyes, etc. Sensory figures naturally go hand in hand with interactive notebooks, so many teachers use them as notebooking activities.

As an Amazon Associate, I earn from qualifying purchases.

Why You Should Use Sensory Figures in Social Studies

Not only does this allow students to think deeply about a historical figure’s or group’s experiences, but taking the perspective of someone else also helps build empathy.

Students can create sensory figures based on individuals (Abraham Lincoln, Anne Frank, etc.), but they can also be used to represent groups of people (tenant farmers during the Irish Potato Famine). Sensory figures can be particularly helpful for situations that require defining the characteristics that separate one group from another (e.g. feudalism in medieval Europe or the caste system in India).

Examining complicated issues from multiple viewpoints allows for deeper understanding of historical events. I love using sensory figures when we’re studying any opposing groups in history. For example, students can create sensory figures based on both a Loyalist and a Patriot in the years leading to the American Revolution. My students even used sensory figures to analyze different viewpoints from the Israeli-Palestinian conflict.

Depending on how you’re using sensory figures, you might want students to complete individually or together. Individual sensory figures work really well with interactive notebooks. A small group of students can work on the same person, or you can assign each student a different figure. My students loved sharing their figures with partners or doing a gallery walk to see their classmates’ work. A cool way to make a group sensory figure project even more exciting is to have them draw a life size figure on a large piece of butcher paper. One student in the group can lay on the paper while the other members trace the outline of their body.

Sensory figures can be differentiated based on several factors, such as which figures you assign to students, whether sentence stems are provided, including a word bank or not, requiring students to draw their own figures vs. providing an image, etc. I’ve found that including a word bank can be beneficial for many students to help guide the information that you want them to include in their descriptions. For example, a word bank for a Teddy Roosevelt sensory figure might include terms such as Rough Riders, Panama Canal, Spanish-American War, and Bull Moose Party.

A fun way to extend the activity for students looking for an extra challenge is to require them to add material objects and colors in order to provide additional insights into their figure. For example, a student might add a big stick to their Teddy Roosevelt sensory figure to highlight the president’s famous foreign policy. Or they might color his clothing either brown or green to highlight his love of the outdoors and his influence on America’s national parks.

Now that you’re sold on the idea of using sensory figures for your social studies lessons, here are a few tips for getting the most out of the activity.

As you’re introducing the idea of sensory figures to your students, I highly recommend completing a sensory figure with them. Just choose a person all of your students are likely familiar with. It can be another teacher at your school, a celebrity, a historical figure you studied in an earlier unit, etc. If you’re feeling brave enough to put your self-esteem in the hands of a group of adolescents, you could even have your students help complete a sensory figure about you!

Remind students that you want them to think deeply about their assigned figure as they’re responding to the prompts or completing the sentence stems. Let’s say you’ve assigned a sensory figure about a young man assigned to a Japanese internment camp during World War II. A low-quality response to the prompt “I felt” would be something generic or not particularly insightful like, “I felt sad.” Instead, students should give robust responses that actually demonstrate their knowledge of the situation and what it might have felt like to experience it firsthand. “I felt sad knowing that some people didn’t think I was a ‘real’ American and felt the need to lock me up” would be a higher-quality response. It’s also important to remind students to try not to repeat topics as they’re responding to the prompts. Each sentence stem will ideally focus on a different aspect of the historical situation or person they’re studying, and each statement should be specific to the historical figure’s life.

The flexibility of sensory figures is one of the reasons I love them. It’s completely up to you whether you want to provide an image or not. I’ve used sensory figures for multiple topics in my class, so I switched between making them draw vs. providing images for them. If your students often complain about not being able to draw well, providing images might be the easiest way to go.

You can also decide if you want to provide the prompts or have students choose their own. Almost all of my sensory figure assignments use these prompts, but you can use any that make sense to you:

I’ve found that 5-10 prompts is a good amount. Older students are usually comfortable with completing more, but younger students may benefit from having sentence stems.

It’s really easy to create your own sensory figures or just have students draw the figures themselves. If you’re looking for pre-made sensory figures that are ready to print and go or be completed digitally through Google Classroom, though, I’ve definitely got you covered! I have several sets of sensory figure templates on a variety of topics, including Women in History, Hispanic Heritage and Latino Leaders, Ancient Romans, U.S. Presidents, Greek Gods and Goddesses, and Civil War Figures. You can see all of my body biography templates, including some based on literary works of The Outsiders, To Kill a Mockingbird, and The Great Gatsby, in my TpT store.

So what do you think? Are you going to give sensory figures a try in your classroom? Have you used them already? I’d love to hear about your experiences using sensory figures and any tips I may have forgotten. Leave a comment below!

For another interactive idea great for you social studies classroom, check out this other post all about interactive fans! 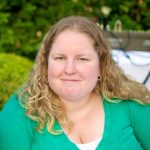 Hello! I’m Katie and I’m so happy you’re here! I’m very passionate about helping teachers, so I started this blog as a way to create and share interactive resources with other educators. I hope these resources can help save you time while also engaging your students. This blog features teaching resources and advice. My hope is that this will be a community for teachers and other educators who are just as passionate as I am about cultivating lifelong learners and helping our students grow. ... END_OF_DOCUMENT_TOKEN_TO_BE_REPLACED

Dr. Loftin’s Learning Emporium is a participant in the Amazon Services LLC Associates Program, an affiliate advertising program designed to provide a means for sites to earn advertising fees by advertising and linking to amazon.com.